Believe it or not the answer to when you should hire someone is sooner than you think and before you are ready. Whether you are working for yourself or you’re running a studio the truth is no matter how awesome you are you cannot do it all. At the beginning of your business, you have to “bootstrap it.” In fact, even if you have the money to hire all the people there is a lot to be said for focusing on doing only what you need and doing most of the work yourself. In the book “Power of Broke” Daymond John explains how so many businesses did better by not having the funds to do everything at one time. But, at some point, your badass skills will fall short of being able to do all the things well. Or, lack of time to do all the things will get in the way of your growth. So, how do you know when to hire? And, then how much do you pay them?

First, let’s talk about how to know when you need to hire. Believe it or not its less about when you have “enough money” to hire someone and more about when you lack of hiring someone is actually costing you money and growth.  Most people make the mistake of hiring people for the job they needed months ago and not for where they are going to grow. For example, you know you need to have your website updated, you have been writing blogs but they are inconsistent because once you get in a groove then you realize your social media marketing isn’t where it should be. And before you know it you’re overwhelmed and not doing any one thing well. You’re tired, frustrated, and wondering why do any of it. You end up not growing your business as fast as you want or could. And, you put off the dreams and goals you have because you “don’t have time.”

I get asked all the time how I “do it all.” And I am really honest; I have a team. And I didn’t start out with a team nor could I afford my entire team at the beginning. I barely could afford my first hire. But, I also knew that the more she did for me the more I could teach aka make money. Hiring my first assistant was scary and also the light I needed under my arse. And yours will be too. Because, when you have people you’ve got to pay you start to see opportunities to make more money in more ways. You also stop feeling like you charge to much or worry about charging for a late cancel. You have a team to pay for.

How did I know when to hire? Great question. There were things I wasn’t doing not just because I didn’t have time but because I dreaded doing them. They literally made me annoyed. Frustrated. And awful person to be around. They actually took longer than they should because they were not my strengths. Which was costing me money because I could have been doing other things in that amount of time I was wasting. So, I decided I needed an assistant. Someone to do the things that were taking too much time.

Step one: Write down ALL the things you currently do, need to do, and want to do in your business.

Yes, that will take time and you should take the time to write these things down. Just brain dump it all. EVERYTHING. Even the changing of the toilet paper. Once you have this brain dumped list then I want you to take anything that doesn’t require YOU and put them in either a “F yes” column or a “no” column.

For example, to put a video of mine up on Youtube it has to be filmed, edited, the copy has to be written, and then it is uploaded to Youtube. Of these tasks I love filming and writing! But, do not love editing and uploading. And truthfully the only one of these tasks that requires me to do anything is filming. The writing could even be outsourced.

Here’s another one, teaching a client. To do this they need to be scheduled, they need to pay or their package needs accounting for, then they need to be taught, maybe a reminder has to be sent. Of these tasks the only one that is an F yes for me is teaching. I can do all the other things. And you may even be thinking “But LL most of those things don’t take that long.” True, they might only take one or two steps. But, I don’t want to do those things. They don’t light me up and therefore those steps not only waste my time, they cost me money. I could be doing something else with that time.

Step two: Whatever is on the “No” list that doesn’t bring you money you have to hire for.

Step three: Know how much your hourly rate is.

When you first go out to hire people for your business some people might ask you “what is your budget?” This question may have you worried. Or even thinking that they’ll cost you too much. But, if you know your “hourly rate” then you’ll know how much you can spend on a new team member. Side note most people will just say how much they charge per hour. But for websites and some projects, they may want to know what your ballpark is and we can talk more about this together if you need. But another way is to have a detailed list of what you want need and then get quotes on the same project from several people. Let them pitch themselves to you. But for someone working for you hourly like an assistant etc you’ll want to have an idea of how much you’re willing to pay for the job. As I mentioned my first hire was an assistant. And I decided that I could pay about $5 more than min wage so I could get a person who would be dedicated during those hours. But, I also could only afford that person to work 5 hours a week for me. How did I come up with that?

I knew my hourly rate!

Here’s how you figure out yours:

What is the amount of money you want to gross in your business in a year?

Divide that amount by the number of weeks you will work in a year.

Divide that number by the number of days you will work in a week.

Then take that number and divide it by the number of hours you will work in a day.

The answer is how much you must be charging at minimum for your time. And, that means anyone you hire that is less than that is saving you money.

So, I knew that I was able to take on one more hour of teaching a week and that gave me 5 hours for my assistant each week. I literally created 4 hours of time for myself each week by hiring her.

And, then when the results of her working for me began to take effect we were able to bring on another assistant to do other tasks on my “no” list. And that meant I taught one more hour a week, got another 5 hours out of another person. And thus had 8 hours extra. What would you do with an extra 8 hours?

Step 4: Create a job description from the “no” list.

In this podcast episode with Kareen Walsh she goes over how to know who to hire. And not just who but literally write the job description that saves you from hiring the wrong people. Too often people finally decide to hire but they don’t have a clear job description. So they hire the wrong people. Which will literally waste your time. AKA money. And then you’ll say “LL I tried to hire and it just didn’t work.” And you’d be right. But, you went about it the wrong way. When you look at the list of the things you love you create your own job description according to Walsh. And the stuff you don’t want to do creates the job descriptions of who you are hiring.

Step 5: Set them Up for Success

Training people to do the work better than you would is not easy but it is possible. There are some great tips for creating systems that are foolproof in the book “The Replaceable Founder” But, maybe you don’t have a system yet because its something you need but you haven’t done or haven’t had a chance to create a good system. Then first be sure to hire someone whose strengths and desires are related to the job. Don’t hire your friend just because they need work and will take what you will pay them. And be sure to take the extra time needed (and you will need it) tell them what you like that they did and why as well as what changes you would make and why. For example, say you’re hiring someone to write your newsletters and they do and you like the first two. And you say “oh I love these.” But then the third and fourth come out and you’re like “ugh these are not what I was expecting.”

All of our team works remotely so when we are having them take on a task of ours we will film what we do and have them create the “system” for it. This system then lives somewhere we can keep so if we ever need to hire anyone to do it they can follow the last person’s system for it. But, before we keep it as a true system we do have another person (in our case on our team but you could use a friend) to follow the system. It should be easy for anyone to follow their steps.

We give feedback often on what we liked and again WHY we liked it. And if we would change something we say why. This way they can start thinking like us.

Step 6: Have a plan for the time they are giving back to you.

If you are like I was in the beginning the people we hired allowed for me to do more things that would propel the business forward aka make more money how many hours is it giving you and exactly what are you doing. If you’re not clear on this you will easily fill it with other busywork. Now, almost three years after our first hire many of our hires actually give us time off. Yep, time to live life. What will you do with those hours?

Finally, I leave you with this reminder, hire for where you are growing. It is so easy to hire for the business you had yesterday. But then you’ll always feel like you’re not growing. And that you’re always playing catch up. Where do you want to grow your business? What jobs would be a “no?” Who are you hiring first?

P.S. If you need help with hiring and firing here is a course that gives you more tips on this topic.

Lesley Logan fell in love with Pilates after her first 100! From side-hustle to full time, she jumped from teacher to manager to running multiple studios. She wrote a book that focused on the business of Pilates, which grew into ProfitablePilates.com and is now a business coaching program called Agency. Take class from LL at OnlinePilatesClasses.com and listen to her podcast at LesleyLogan.co/podcast. When not in Los Angeles she travels, leading workshops and retreats around the world.

This site uses Akismet to reduce spam. Learn how your comment data is processed. 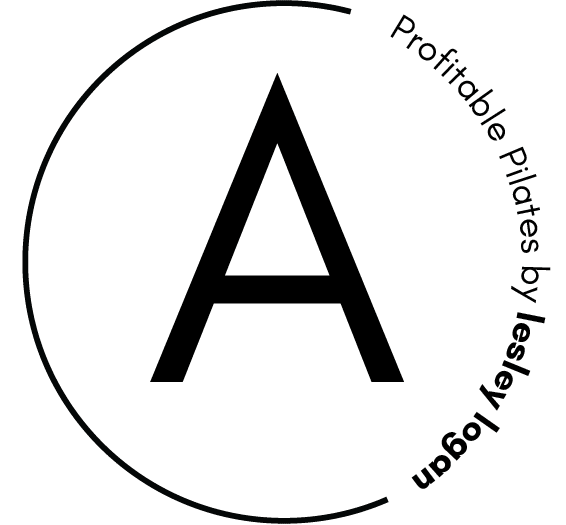 You are amazing!
Success starts here!
Raise your rates!
Create your dream schedule!